10 Most Venomous Snakes in Australia

Australia is a country known to be home to a large number of dangerous animals. Among them, there are about 170 species of snakes, including the 3 most venomous in the world. Despite these not very reassuring statistics, Australia has only a few snakebite related deaths each year, unlike Asia which has nearly 11,000.

But that’s not why you shouldn’t be vigilant if you go to this country, because the species found there are still very dangerous. Some of them are very venomous, others are very aggressive and others like to wander in the inhabited areas. In this article, you will discover the 10 most venomous snakes in Australia.

With a range that stretches along the east coast of Australia, the Red-Bellied Black Snake is less venomous than other species. Although a bite from this snake requires prompt medical attention, it is usually not fatal to the victim. This species likes to hide in the woods and bushes, but also near water dams, billabongs and streams. Be careful if you are near a stream, as this reptile is capable of staying underwater for up to 25 minutes.

As its name suggests, the Common Death Adder is a fearsome animal. This ambush predator is very fast and can launch an attack in less than 0.15 seconds. It is mainly found in Queensland, Victoria, New South Wales, South Australia and in the coastal regions of Western Australia.

When this species faces a threat, it freezes and camouflages itself in its environment. It is easily recognizable thanks to its triangle shaped head and its robust body. Don’t get too close to the Common Death Adder as its bite is extremely painful, especially because its fangs are among the longest of any snake in Australia.

Despite its small size of only 1.5ft (50cm) on average, the Small-Eyed Snake is not to be underestimated. Indeed, it has a powerful venom made of a long-acting myotoxin. It attacks muscle tissue and can have an effect that lasts several days after injection into the body.

This species lives in the hinterland of eastern Australia. You are unlikely to encounter this species during the day, as it is rather nocturnal. Moreover, it has a not very aggressive behavior towards humans. Only one death due to its bite has been recorded so far. Stay alert though, because its small size and small eyes make it very discreet. 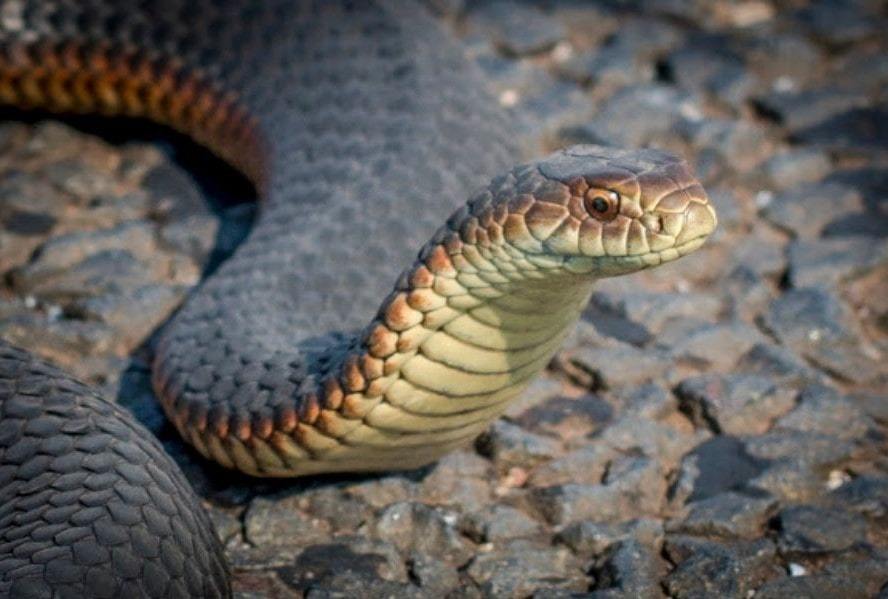 This snake is quite different from its congeners. Indeed, the Lowlands Copperhead is the only venomous species that has adapted to the cold climate and lives above the snow line.

It is mainly found near low vegetation areas in southeastern Australia and Tasmania. It particularly likes to be near water areas. Even if the Lowland Copperhead generally avoids confrontation with humans, it does not hesitate to attack them when it feels threatened by them. However, this snake rarely bites and moves slowly, which is why it has only recorded a dozen bites and one death so far.

This snake is very impressive ! With an average size of 10ft (3m), it is one of the most venomous species in the world. Despite its low toxicity, the Mulga Snake is capable of injecting large doses of venom, up to 150mg in a single bite. Because of this, it is considered a very dangerous species for humans in Australia. It is also known to be able to cling to its victim to inject its poison more easily.

Belonging to the genus Pseudechis, it is also known as the King Brown Snake.

The Mulga Snake is distributed in all the states of Australia, except Tasmania and Victoria.

The Coastal Taipan is known to be very aggressive towards humans. Living in the northern and eastern regions of Australia, it is one of the 3 most powerful land snakes in the world. Moreover, it is also very imposing, with a size that can reach 6.5ft (2m). Finally, this species has the longest snake fangs in the world, with a size of 0.47in (1.2cm).

The venom of the Coastal Taipan is composed of a powerful neurotoxin. Symptoms of its bite include headaches, convulsions, vomiting and nausea, paralysis as well as internal bleeding and kidney damage.

In order to survive the attack, the victim will have to be treated quickly because death usually occurs within 30 minutes after the injection. Only an antivenom can save the victim.

The Inland Taipan is the most venomous land snake in the world. According to studies, a single dose of its venom is capable of killing a hundred humans. Fortunately, it is much more shy than its close cousin (Coastal Taipan). It is very solitary and presents little risk of attack.

Found in the remote and semi-arid regions of Queensland and South Australia, the Inland Taipan likes to hide in crevices and cracks of dry rocky plains. This species is so rare that it has long been a mystery to scientists.

At present, only a few people have been bitten by this reptile and all of them have survived thanks to an anti-venom. However, if the victim is not treated quickly, death is inevitable.

As its name suggests, the Tiger Snake is a striped snake, which makes it difficult to spot. This snake is responsible for the second highest number of bites on humans in Australia. With its highly neurotoxic venom, its mortality rate is between 40% and 60%.

If the Tiger Snake causes so many deaths in humans, it is mainly because it lives in the metropolitan areas of Melbourne and Tasmania. They are attracted by houses and farms that hide many rodents, and therefore food for them. Most bites come from such places. Because of their natural camouflage, it is not uncommon to see one of these snakes being stepped on, something they don’t really appreciate…

This species is one of the most common in Australia. The Western Brown Snake likes to live in dry areas and Eucalyptus forests, grasslands and woods.

Its venom is far from being the most powerful, but the quantity it can inject makes it an extremely dangerous animal for humans. Symptoms related to its bite are headaches, nausea and abdominal pain. It can also attack pets, causing paralysis.

The Eastern Brown Snake is the most dangerous venomous snake in Australia. It is also the second most venomous land snake in the world after the Inland Taipan. It is responsible for about 60% of snake bites in the country.

With adult specimens reaching a size of 6.5ft (2m), this species is very aggressive and fast. When it feels threatened, it lifts one third of its body off the ground creating an “S” shape to warn its victim of its attack.

The symptoms caused by its venom are a progressive paralysis and blood that no longer coagulates. Its bite is inevitably fatal within minutes if not treated with an antivenom. Its toxicity is so strong that several doses of antivenom may be necessary to cure a victim.

➤ Read also our article on the Eastern Brown Snake

Australia has the most venomous snakes in the world. If you live in this country or are simply going there on vacation, make sure you know what species reside in your area. This could save you a lot of trouble.

If you want to learn more about venomous snakes, we have written an entire article on how snake venom works, as well as the different types that exist. Don’t hesitate to subscribe to our newsletter if you liked this article to be informed in advance of the release of our new contents. You can also tell us about your experience with snakes in Australia in the comments.