Snake Venom: From a Powerful Weapon to a Painkiller

Do you know what a snake, a spider, a scorpion or a jellyfish have in common ? All these animals are poisonous ! Venomous does not necessarily mean that they are dangerous. Nevertheless, if we take snake bites, they are responsible for nearly 125,000 deaths each year. And as you can imagine, venom is the main cause.

In this article, we will look at the venom of the snake, a formidable biological weapon that it uses both to defend itself and to immobilize its prey.

What is Snake Venom ? 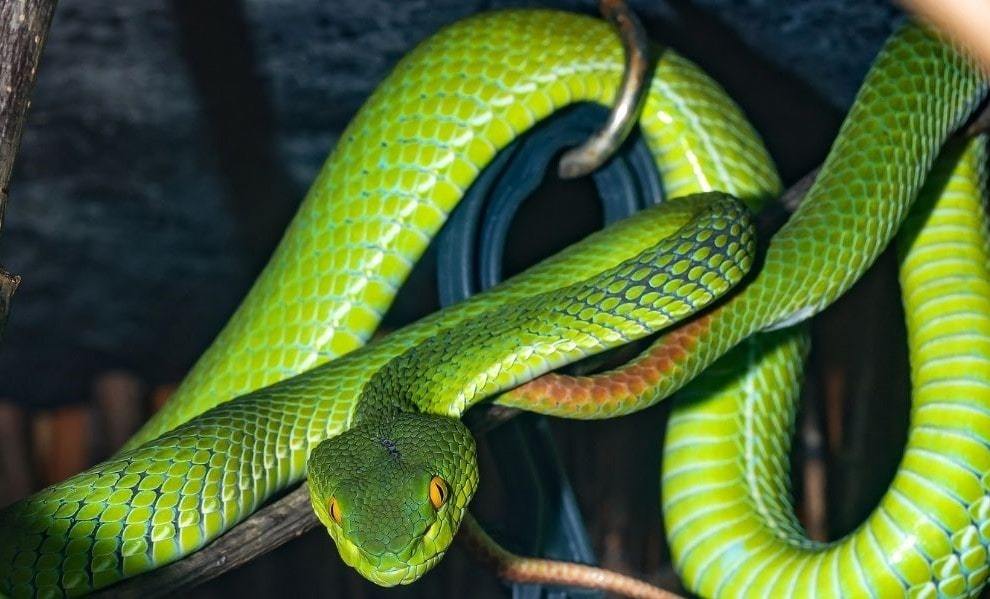 Venom is a formidable weapon in animals. This deadly poison is a way for them to defend themselves against other species, including humans.

The method of making venom in snakes is fascinating. It is created by a specific gland, then sent to the fangs of the reptile and finally injected into the body of its prey. Its composition is complex: it is composed of a dangerous cocktail of proteins, peptides and organic and non-organic molecules with different effects depending on the species.

There are 4 main types of venom in snakes:

There are also secondary molecules in snake venoms that produce even more specific effects, such as:

How does Snake Venom work ? 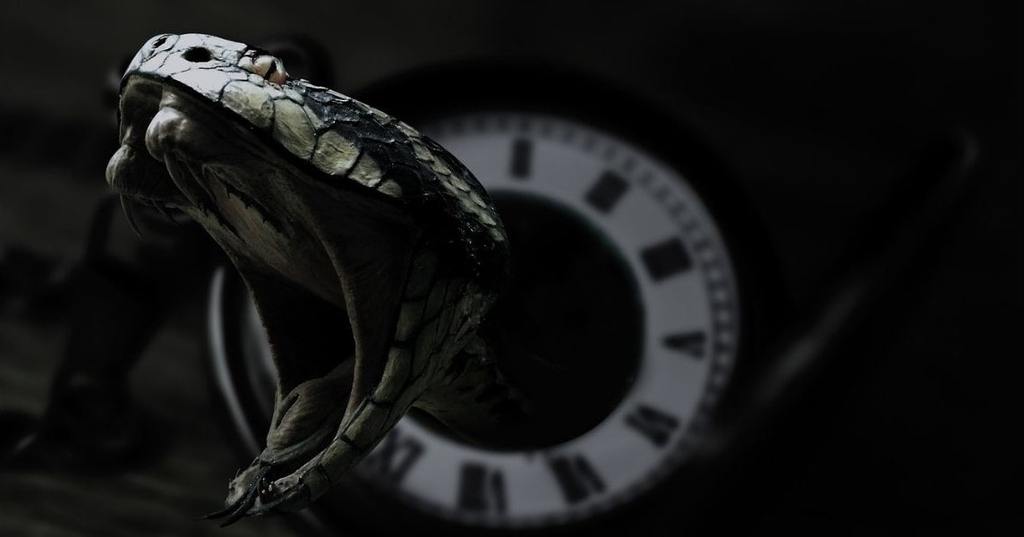 Most snakes inject their venom with their fangs. When biting their victims, the fangs pierce the tissue, creating a wound and allowing the venom to enter the body. The snake’s venom injection system consists of four main components:

Are you passionate about these snakes ? Show your attraction for these mythical animals by wearing one of our Snake Rings.

From the beginning, we have been talking about snake bite. Although this is the primary method of injecting venom into these reptiles, some are also capable of spitting it out. Indeed, some snakes of the Elapidae family and belonging to the Naja genus are able to project their venom from a distance. This allows them to blind their opponent and to escape more easily. Once the eyes are hit, they can quickly become painful, irritated and even blind you temporarily if not rinsed quickly. In addition, the cornea can also be damaged.

Why are snakes venomous ?

Venomous species use their venom to defend themselves or to immobilize their prey before eating them. But this has not always been the case! In fact, the method of making venom has evolved since the appearance of this reptile on earth.

If you didn’t know, snakes have existed for nearly 54 million years in ecosystems around the world. Today, there are nearly 3,600 species, 200 of which are venomous. The ability of some of these reptiles to develop venom is the result of many mutations that have occurred to adapt to new environments.

After reading many researches done on this animal, we can deduce that the snake’s venom has developed with the copy of some harmless genes present since its appearance. Over time, and to better adapt to new environments, some species have developed mutations giving them a high toxicity.

Adaptation of the venom

These mutations appeared in order to survive in their natural habitat. But although they have become real dangers for their preys as well as for their predators, the latter will also develop new techniques that will allow them to resist the snake’s poison. This can be new ways to dodge snake attacks, better camouflage to avoid attracting them, or the mutation of certain genes that will counter the attack of the venom in the body. Therefore, venomous snake species will also have to continue to adapt. In reality, prey and predators are in a never-ending spiral.

Humans are also partly responsible for the evolution of venom in snakes. Indeed, the human population is constantly growing, which forces humans to reduce the natural habitat of animals to expand cities.

Climate change also plays an important role in the evolution of snakes. We notice that they are moving more and more to the north as the world warms up.

All of these factors could well be a constant increase in the risk of snakebite. As they adapt to humans, some species may become even more venomous than they are, while others may lose the ability to produce venom.

Why are some snakes more venomous than others ?

If you have ever read about these animals, you have probably heard or read that some species are capable of killing 100 people with a single dose of their venom. But how do you measure the toxicity of a poison ?

Be careful, just because you have been bitten by a venomous snake other than those present in the top 10 does not mean that it is not dangerous. Although the Inland Taipan is considered the most dangerous venomous species for humans, there are many others that remain very dangerous.

To determine the toxicity of a venom, researchers have of course not tested them on humans. They usually inject small amounts into mice, then observe the results to estimate what they might do to humans.

Therefore, these numbers should be taken with caution. All these data are relative and can vary from one specimen to another. In addition, some venoms act differently on mammals than on other reptiles for example.

Why are not all snakes venomous ?

One might ask why not all snakes have venom when it is a very effective survival tool.

Well, the answer comes mainly from the fact that the production of venom requires a lot of energy from the snake. A lot of energy means more food is needed to fuel this production. Some species don’t need poison to kill their prey. So, over time, their ability to develop these toxic substances faded and eventually disappeared because it required too much unnecessary energy.

Venom: the root cause of our fear of snakes

The fear of being infected by a snake is hereditary. Our ancestors already avoided approaching a venomous snake because they had a better chance of dying. In other words, in addition to being a defense and attack tool for the snake, its venom is also an effective deterrent.

The feeling of fear and danger from a snake bite can be passed on to the snake’s predators (including us). In fact, experiments conducted on macaques have shown that the snake has influenced the brain development of primates. While the monkeys had never encountered a snake before, they experienced a feeling of stress when they saw an image or object that resembled one of these reptiles.

Snake venom, and the snake in general, has always been closely linked to Medicine. This animal is today the official emblem of Medicine with the Rod of Asclepius.

The Effects of Snake Venom on Humans

Snake venom is one of the most studied of all animals, mainly because it is the cause of a large number of deaths every year. In fact, nearly 150,000 people die each year from snakebite, and nearly 400,000 have limbs amputated.

As we have seen previously, each species has its own poison that acts differently on the human body. In some specimens, the many toxins that make up the venom disrupt communication between nerves and muscles, while others attack blood cells directly and cause internal bleeding.

Theoretically, the human body is able to produce antibodies to defend itself against the venom. The problem is that it takes about a week for the venom to produce an optimal amount, while most snake venoms kill a human within hours of injection. Moreover, the poison is composed in part of Stealth Molecules, i.e. molecules undetectable by the body. 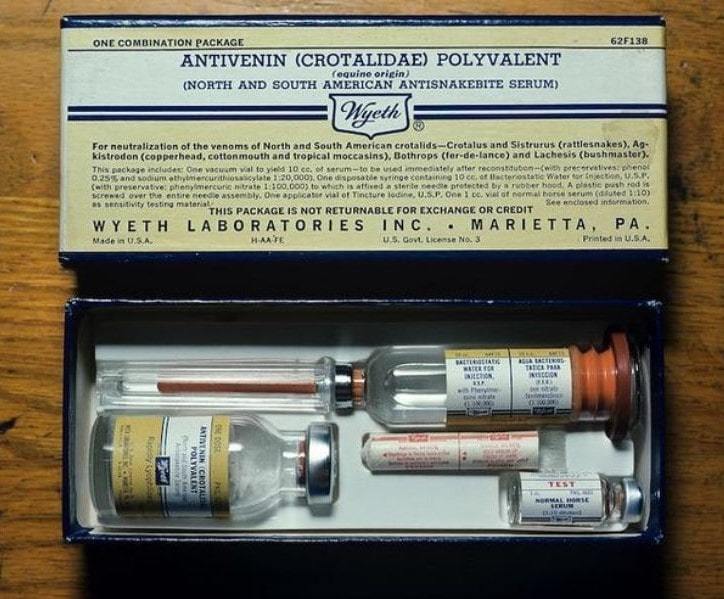 There are anti venoms that allow to counter the effects of a snake’s poison. These must be administered by vein in the form of an infusion, as soon as possible after a bite. The role of anti-venom serum is to capture the venom toxins in the body and eliminate them. It is the only way to get out of such an envenomation at the moment. But rest assured, the side effects of serums are rare and not very impactful.

At the end of the nineteenth century, specialists focused on the creation of an anti-venom serum. To make an antivenom, they first took the venom from the snake, then diluted it and injected it into another animal, often a horse. The immune system of these animals will produce antibodies that will then be recovered and injected into humans.
Since then, the manufacturing method has changed little. However, monovalent serums (which act against only one species of venomous snake) are beginning to be replaced by polyvalent serums (which act against several venomous species).

Another evolution concerns the form of the serum: Previously, only liquid serums existed. The problem was that they could not be kept for more than 3 years, which is relatively short and requires regular renewal of stocks. Today, more and more freeze-dried sera are manufactured. These only need to be redissolved before use and can be kept for longer periods (up to 5 years).

It is said that snakes are afraid when they see a fellow snake in front of them. Protect yourself from these dangerous reptiles by wearing a Snake Necklace.

As if that were not enough, some antivenom serums are threatened with shortage. This is the case of “FAV-Africa“, an antivenom capable of acting against the bites of a dozen snakes among the most dangerous in Sub-Saharan Africa.

The cost of such an antivenom is also quite expensive, between 300$ and 1000$ per gram. A price that is out of reach for snake bites, which are usually from a poor rural area.

What is there to remember in all this ? Scientists now know very well how snake venom works. As it always acts in the same way on the human organism, it will be possible very soon to create even more efficient anti-venoms.

Have you ever heard the story of Steve Ludwin, a singer who had the wonderful idea of injecting himself with the venom of 35 different species of snakes among the most venomous in the world. With over 25 years of daily doses, he plans to get his immune system used to creating antibodies. The singer is putting his life at risk, but his extraordinary experience is a valuable asset for research. A university in Copenhagen has even recently created an Antibody Library in which they keep copies of all the antibodies produced by Ludwin’s immune system.

Each species has a venom composed of different molecules. All these toxic substances are inherent to the snake and are not found anywhere else in nature. As a result, scientists have discovered many benefits in these chemicals.

Since the dawn of time, humans have used toxins in medicine. Today, modern medicine is taking advantage of the large number of toxins present in snake venom to create new medicines. Despite all the medicines created from these toxins, only 7 of them have been certified to date.

Here is a non-exhaustive list of the uses of snake venom in the medical field:

Snake venom is everywhere, including in cosmetics. It may seem strange, but it is even used in the pharmaceutical industry. It is found in the composition of creams and ointments, especially for their high content of enzymes, amino acids and peptides.

Indeed, the venom would have very beneficial virtues against skin infections and psoriasis. A synthetic form of snake venom has even been manufactured by Swiss specialists to relax facial muscles and reduce the appearance of wrinkles.

It also appears in many expensive cosmetics. It is a quick, painless and effective alternative to Anti-Aging Treatments.

Although snakes are basically very dangerous animals for humans, their venom is nevertheless very beneficial, especially in the pharmaceutical and medical fields.