The snake is an animal that scares most people. However, it is present everywhere in Egyptian beliefs and symbols. In this article we will see what the snake symbolizes in Egypt and the association of the ancient gods and goddesses with this reptile.

Archaeological excavations have shown that the snake was present in the ancient Egyptian civilizations. Some specimens were found in the desert sands, others in old ruins, near the Nile, in fields, in swamps or in houses.

At that time, venomous snakes seemed to be a real threat for humans and domestic animals. This animal was very controversial at that time. Indeed, in addition to being dangerous, it symbolized good, being considered the protector of the king for example, but also evil, embodying the demon of the underworld.

Thanks to a papyrus now preserved in the Brooklyn Museum, we know that the Egyptians had a great knowledge of snakes. On this paper, written by a physician, we find a list of thirty-seven species of snakes discovered in their time.

In Modern Egypt, thirty-six species of snakes (or thirty-four, thirty-seven or forty depending on the source) have been identified, seven of which are poisonous. Although the ancient typology does not correspond exactly to that of Modern Egypt, it is still relatively close.

On this papyrus, we also find a detailed description of each species and its habitat, but also a description of the symptoms related to the bite of the venomous snake, whether it is fatal or not.

There are also specific remedies according to the species. This could be emetics, compresses, incisions of wounds, unctions or massages to be performed. There was also a list of magical incantations, even if they were not very effective.

The ingredients of the remedies were often liquids and/or substances of animal, vegetable or mineral origin. The most frequently used ingredient was the onion, still used in traditional Egyptian medicine to treat a snake bite.

Some species of Cobra live in Egypt. Among them, there is the Philippine Cobra, a species characterized by its black neck and its atypical method of venom injection. One of the other very feared venomous species is the viper, especially the Horned Viper. Moreover, it was used a lot in hieroglyphics to write.

Most of the snakes living on the Egyptian territory remain harmless. Some of them are even very useful to humans. Among them is the African egg-eating snake, a species that is widespread in most of Africa and part of the Arabian Peninsula. There is also the Sand Boa, which is very deadly to rodents despite its small size. Some little known snakes such as the Coluber Sinai and the Hoogstraal’s Cat Snake (Telescopus Hoogstraali) reside in the Sinai.

Egyptian texts often evoked the danger of snakes, especially in the religious texts of Ancient Egypt. This threat was even more reinforced during the first intermediate period, when the snake god Apophis was perceived as the enemy of order. 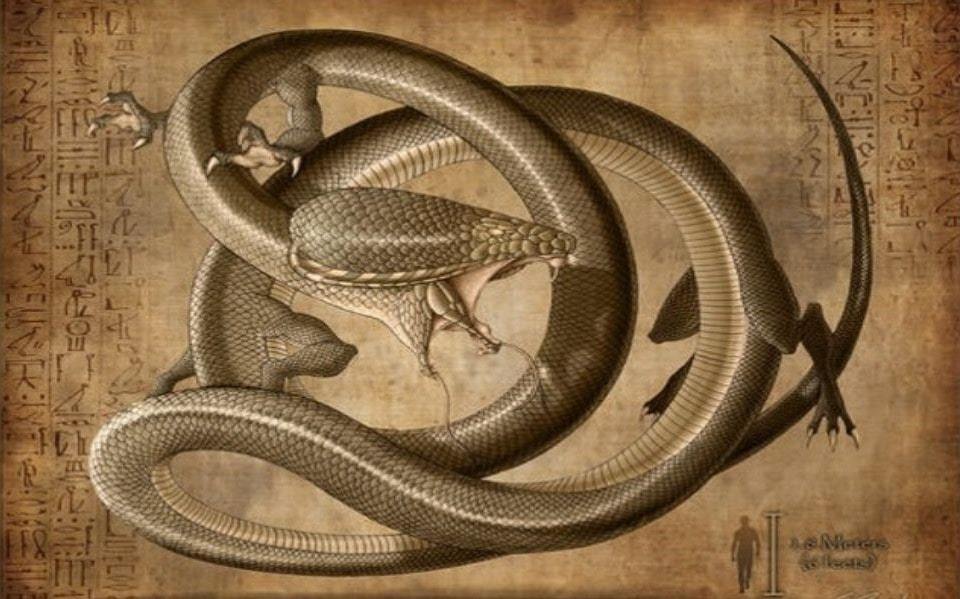 During the reign of Rameses II, Apophis was at the origin of a ritual written in some magic books. Some images of this serpent god were even created from papyrus and wax for lunar festivals and religious processions. Later, these posters were the symbol of various tortures, representing the triumph of Maat and Ra over the chaos symbolized by Apophis.

Renenutet: the Goddess of Nourishment and the Harvest

As mentioned above, snakes can also symbolize good. Some deities who took the aspect of poisonous snakes were even considered positive. Depicted as a Cobra, the goddess Renenutet, whose name means “Nourish” in Egyptian, was linked to the fertility of the fields. She was also the goddess of the granary, but also of the winegrowers and the cellars that she protected.

Although she is only mentioned for the first time in the pyramid texts of the Old Kingdom, she does not appear in art until the New Kingdom. This goddess was worshipped by all Egyptians, and her cult was of particular importance in the Fayum.

The Cobra-Goddess Meretseger personified the pyramid-like peak that covers the Valley of the Kings. According to researchers, she may have been the object of a domestic cult in the nearby village of Deir-el-Medina, the place where the craftsmen in charge of building the tombs resided. They would have found snake figurines during their excavations.

There are still other snake deities in the Egyptian culture. 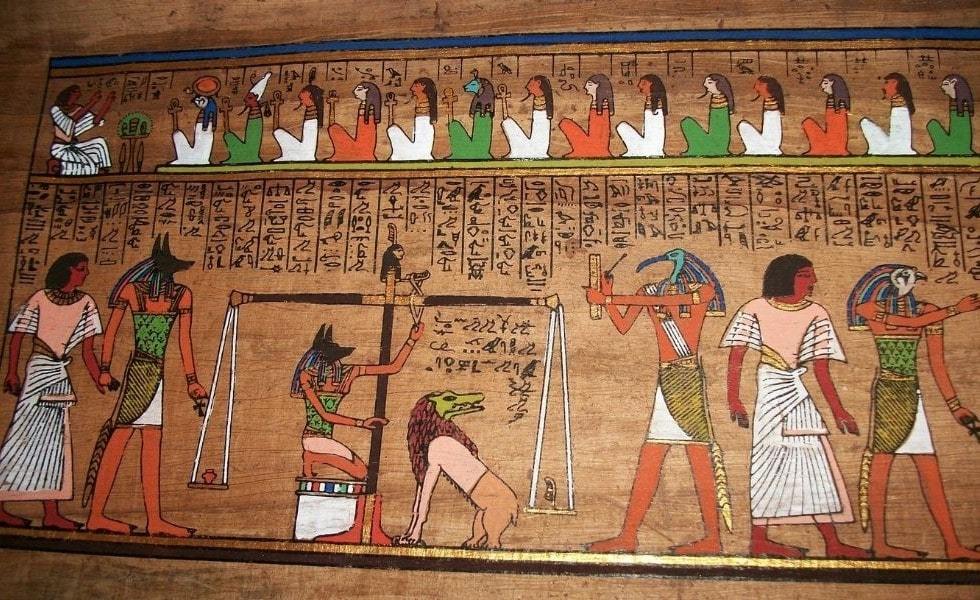 During Ancient Egypt, the weather was hot and the inhabitants usually dressed in a simple light tunic and scandals. The only way to stand out from the rest was to wear jewelry. Except for the slaves, everyone wore jewelry. Legends say that the more jewelry you owned, the more blessed you were by the gods.

Depending on the social class, jewelry was made of different materials: the richest people had access to gold jewelry, while the poorer classes had access to copper jewelry.

The stones that adorned the jewelry were also indicative of your membership in one or another social class. For example, only royalty wore jewelry set with lapis lazuli.

Today, snake jewelry is still a trendy and original accessory. Opt for an inimitable style by wearing a beautiful Snake Ring.

The snake was one of the first animals to inspire jewelers to create jewelry. Its atypical and elastic shape made it an ideal base for the manufacture of rings, bracelets or necklaces. This criterion was undoubtedly one of the main reasons why this reptile has been used in jewelry since the beginning of time. The symbolism of the snake is also a criterion that made them want to use this animal as a model.

To learn more about the history and meaning of snake jewelry we have written an article on this subject that you should check out.

Uraerus: the Symbolism of the Snake Crown 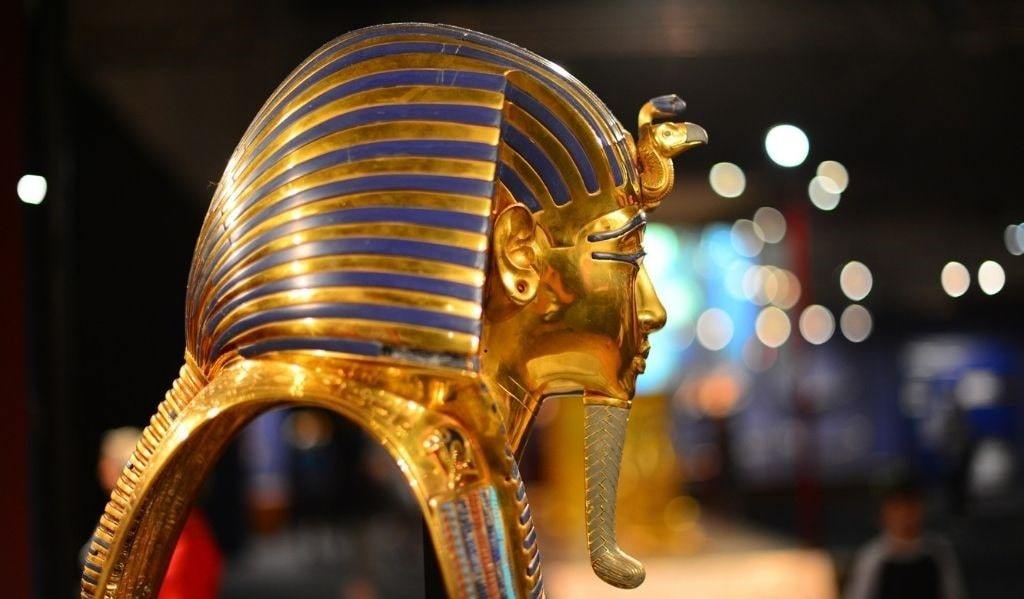 Uraeus is a term derived from the ancient Greek. Its Egyptian name is Iaret, which means the “rearing Cobra”. In ancient Egypt, it was an attribute of the pharaoh and was often depicted under his headdress. The snake here embodied the goddess Wadjet, associated with the Buto shrine of Lower Egypt. She was also linked to Nekhbet of Hierakonpolis, her counterpart in Upper Egypt.

Mummified Cobras were found at Tunah el-Gebel, an archaeological site in Middle Egypt.

There is a myth that tells the birth of the Uraeus. Everything starts from the God Atum who created the God Shu and the Goddess Tefnut. These embodied the dry and wet air. One day, when Atum had sent his eye to fetch his offspring who were wandering in the world, the latter noticed that it had been replaced by the sun. He became furious and transformed his eye into a Cobra. Atoum then calmed him down and placed it on his forehead. Since that day, the Uraeus has become the protector of royalty.

The term Mehen can evoke several things. It refers to the coiled snake (and thus to the shape of a spiral), to the Snake God Mehen but also to an ancient Egyptian game. The latter was mentioned several times in the predynastic period.

This famous game is not only known in Egypt. Indeed, it was also played in Jordan and Cyprus. It was a unique game in Egyptian mythology. Mehen was a multi-player game that could be played by up to six players. At present, we do not know the original rules of this game, but some people have invented their own rules from what they understood.

Winged snakes are very present in Egyptian art and in the ancient religious texts that decorate the royal tombs. For information, Wadjet was sometimes represented as a winged serpent. Through some writings, Herodotus (a Greek author) claimed to have seen skeletons of flying snakes while visiting Egypt.

We still don’t know at this time what is the origin of the stories of the winged snakes. However, there are suggestions that the idea originated from the resemblance of the posture of the snake’s neck to its front body with wings when excited.

In modern Egypt, the Cobra is certainly one of the most feared animals. The myth fed by Shakespeare about the responsibility of an Asp in Cleopatra’s death only reinforced this idea, but this species of viper does not exist in Egypt. On the other hand, the culprit would be well and truly an Egyptian Cobra which held her chest before her death.

Whether it is through the Divinities, the Jewels or the written or material traces found, the snake was present everywhere in the Egyptian culture. Even today, it can be found everywhere, especially in jewelry. If, like the deities of yesteryear, you want to get a bold and symbolic Snake Jewelry, we advise you to take a look at our wide range of products.

If you liked this article, we invite you to subscribe to our newsletter. This will allow you to receive our new articles in advance. Do not hesitate to give us your opinion on the subject in comments. We would be delighted to discuss with you !