7 Most Poisonous Snakes in Africa

The African continent is known to be inhabited by the most dangerous snakes in the world. There are about 150 species of snakes in South Africa. Following the ancient saying of Hippocrates “Prevention is better than cure”, we have made a classification of the most poisonous snakes in Africa.

This snake lives mainly in the tropical forests of Africa. Fast and agile, it is easily recognizable thanks to the bright green color of its scales. This species is arboreal. It spends most of its time in the trees and comes down to the ground very little. Thanks to its large size (about 6.5ft or 2m), this reptile moves easily in trees.

The Green Mamba is without a doubt one of the most dangerous snakes in Africa. Its venom is so powerful that it is capable of killing several humans with a single dose. However, this snake is not very aggressive and rather shy compared to some of its fellow snakes. Therefore, you have little chance of being attacked by one of them. But, if it feels danger and attacks you, death is almost inevitable.

Different symptoms appear after the bite of a Green Mamba. Among them are swelling in the infected area, nausea and convulsions. This is accompanied by difficulty breathing, swallowing and tachycardia. These symptoms may progress to respiratory paralysis, leading to death within minutes. 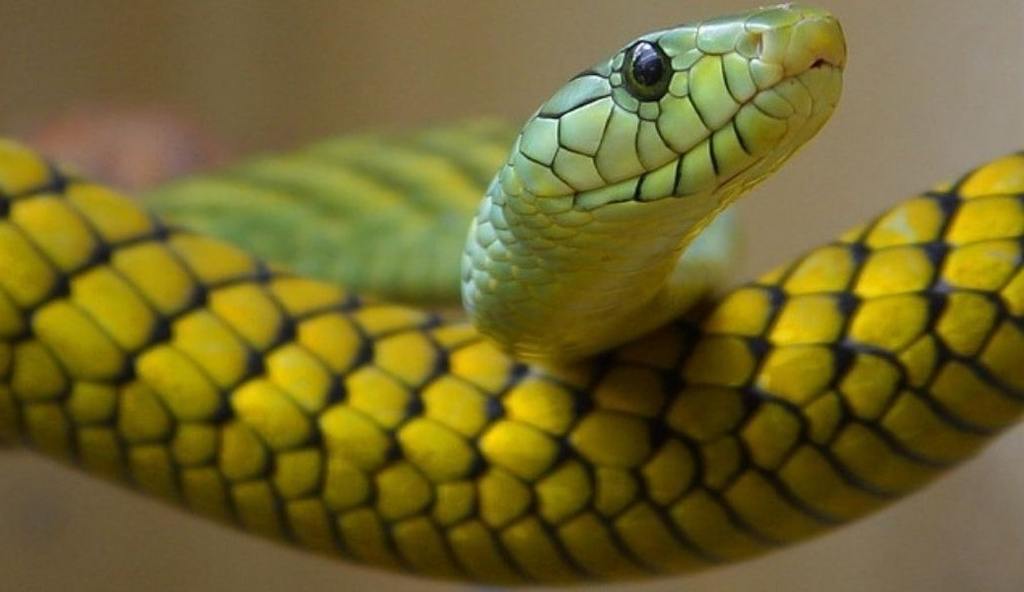 The Boomslang is one of the few snakes of its kind that is dangerous to humans. Its range extends all over South Africa. This snake has large fangs with a powerful venom. Its egg-like head and large eyes are unique to this species. An inherent characteristic of the Boomslang is that it has the ability to inflate its neck when it feels in danger. It measures between 3.3ft and 6ft (1m and 1m80) and has bright colors. Generally, males will have a light green or even black or blue color, while females will have a green or brownish color.

The Boomslang lives in various environments and climates, such as forests, grasslands, plains or savannah. This species is rarely seen on the ground as it spends most of its time in trees.

While the venom of other members of its genus is generally harmless to humans, the Boomslang is the only one to have a very powerful poison. It is essentially composed of a hemotoxin that causes internal and external bleeding. Its venom is quite slow acting and symptoms appear within 24 hours after the injection.

Behind its scientific name “Bitis Gabonica” hides one of the most dangerous snakes of the African continent. The Gaboon Viper lives mainly in the sub-Saharan tropical forests.

The Gaboon Viper has brown and dark brown scales with spots of various colors and shapes. This scaly layer is an excellent way to camouflage itself in its natural environment. This species can measure up to 6ft (1.80m), although its average length is around 4ft (1.20m). 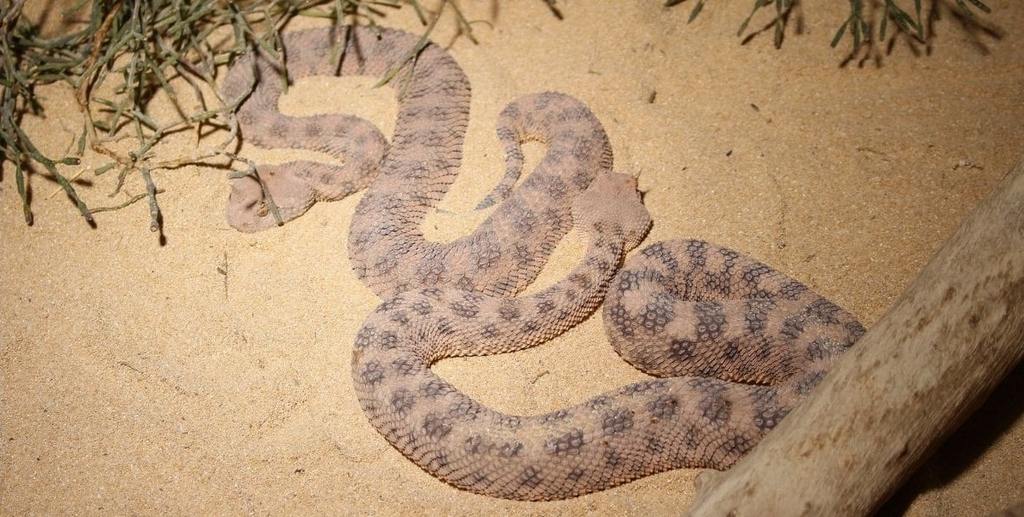 Carpet Viper is a genus of venomous vipers that ranges from North Africa to East Africa and the Middle East. This snake is known to be very venomous and to have a very aggressive behavior towards humans.

This reptile is one of the smallest of the venomous species, with a size of around 2ft (60cm). However, some specimens can reach up to 3.3ft (1m) in length.

A bite from a Carpet Viper can quickly become life threatening. Even though it is a small species, its venom is very powerful. And its aggressiveness towards humans does not help matters. Moreover, this snake often frequents inhabited areas. Consequently, it is at the origin of many snake bites on the continent, a large part of which
continent, many of which result in death.

It is best not to come across the Mozambique Spitting Cobra in the wild. This very aggressive snake is always on guard, ready to inject its powerful venom into anyone who comes to disturb it. In addition to its toxicity, this snake has the particularity of being able to spit its venom with incredible precision. It is capable of aiming its venom at the eyes of its target at more than 10ft (3m). The power of its poison is difficult to bear.

Although the Black Mamba is much more feared than the Puff Adder, the latter is still the cause of the the highest number of deaths in Africa. This species is the most widespread on the African continent. It is mainly found in deserts or dense tropical forests, and at altitudes that can exceed 6560ft (2000m).

If the Puff Adder is so deadly, it is mainly because of its camouflage which makes it almost invisible in the wild. Moreover, it is quite slow and does not move much when you approach it. As a result, many people walk right by it without realizing it.

Its heavy and thick body rarely exceeds 3.3ft long (1m). Its head is flattened and triangular in shape. Its color varies from black to brown with a row of dark brown scales on its back. This species is rather active at dusk, and seeks sunny places to warm up during the day.

The Puff Adder’s venom is cytotoxic. The main symptoms are swelling of the bitten area, nausea and internal bleeding. There are also side effects caused by the swelling that can cause death if the bite is not treated very quickly. These include kidney failure as well as the destruction of body cells.

This is certainly the most feared snake in Africa. The Black Mamba is a particularly aggressive and fast snake. In fact, it is the fastest venomous snake in the world. Its territory extends over most of the southern part of the African continent.

Learn more about the Black Mamba in our article

The bite of this snake is very often fatal. The effects of its venom are very harmful to humans. Indeed, it causes a respiratory paralysis of the victim in only a few minutes. The envenomation must be treated extremely quickly to hope to survive.

In spite of its danger, this snake remains fascinating. Enjoy the beauty and presence of the Black Mamba with this beautiful Black Mamba Necklace.

The African continent has a number of snake species that are classified as some of the most venomous in the world. If you come across a snake while walking in the forest or even in a populated area, do not try to approach it. This snake is likely to be venomous and could cause serious damage. Before going to Africa, do not hesitate to ask about the snake species present in your area.

0
0
Your Cart
Your cart is emptyReturn to Shop
Continue Shopping
Calculate Shipping
Apply Coupon
Available Coupons
reduc5 Get 5% off
We use cookies to ensure that we give you the best experience on our website. If you continue to use this site we will assume that you are happy with it.I Agree