Coral Snake: The Most Venomous Snake in North America

The coral snake is well known for its colorful red, black and yellow rings. It is also known to be one of the most venomous snakes in the world. The term Coral Snake refers to a large group of snakes in the family Elapidae . They can be divided into two main groups:

The American coral snake is well known for being one of the most venomous species in North America. It is one of the scariest animals in Texas.

Few people really know what is behind this snake with its colorful scaly coat and high toxicity. In this article, you will discover the hidden side of the coral snake.

Facts about the Coral Snake

The physical appearance of this reptile can be deceiving as the average size of the coral snake is only 40 cm to 50 cm, although some specimens can reach 1 m in length. Moreover, its cylindrical body is very thin, which makes it almost “cute” in appearance.

These smooth, colorful scales are a good warning to animals and humans. Indeed, predators quickly understand that this is a highly venomous snake, which can deter many from attacking it.

The tip of its head is rounded and bulbous, which makes it difficult to distinguish from its neck. This shape is rare among venomous snakes, most having a triangle-shaped head. Round pupils are also an inherent feature of the coral snake, while other venomous species have slit-shaped pupils.

The coral snake belongs to the family Elapidae . This family includes most species of venomous snakes, such as the Mamba, Cobra or Sea Snakes. 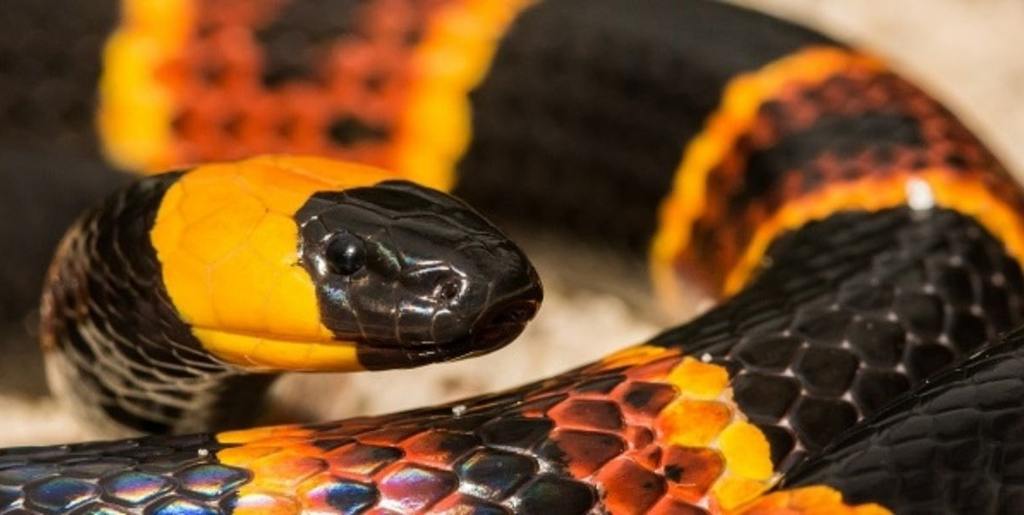 On average, the coral snake has a life span of 7 years in captivity. As for its natural environment, we do not have enough information to define its life expectancy. The longest living specimen comes from an eastern coral snake (the best known), with a life span of 18 years.

The 3 most famous snakes in America belong to the Micrurus genus and are the following:

Micrurus Fluvius: Species endemic to the southern United States and Florida. With a size of about 2.6ft (80cm), it is the most known to the public.

Micrurus Tener: Also known as the Texas Coral Snake, this species has black and yellow rings separated by a red ring. It is found in the United States and Mexico.

Micruroides Euryxanthus: Found in the Southwestern United States and Mexico, this species has red and black rings separated by yellow or white rings.

Among the species of Asian Coral Snake, we find species belonging to the genus Calliophis, Sinomicrurus and Maticora.

There are also two African Coral Snakes belonging to the genus Homoroselaps. These are a bit different, with a wider neck (a bit like the King Cobra), and orange colors that replace the red. 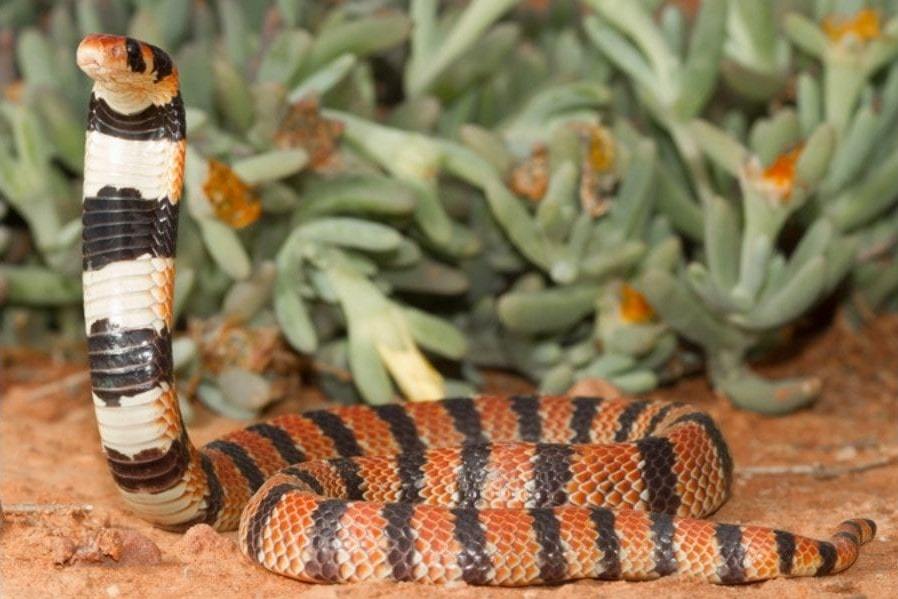 The term Coral Snake is often used to refer to a single species. In reality, it refers to a genus of snakes, among which there are about 70 species of Coral Snakes from America and 15 from Asia.

The 3 best known species are:

Eastern Coral Snake: This species extends from Florida to North Carolina, but also to Texas. It is covered by a shiny scaly layer with black and red rings separated by narrow yellow rings. 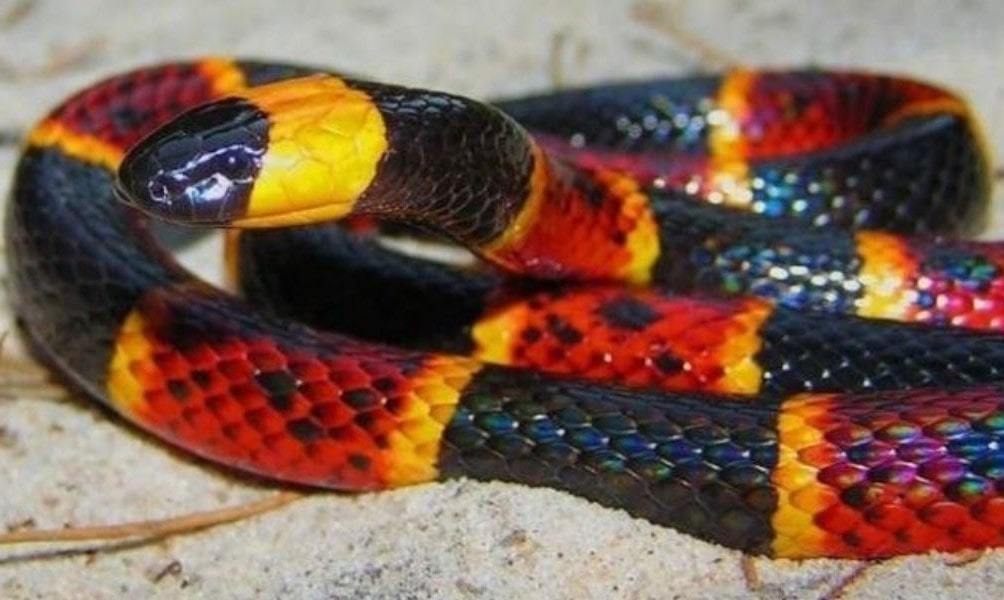 Western or Arizona Coral Snake: This snake from southwestern North America is similar to the Eastern Coral Snake. Its colors are slightly different, with more white than yellow rings and wider than its cousin. 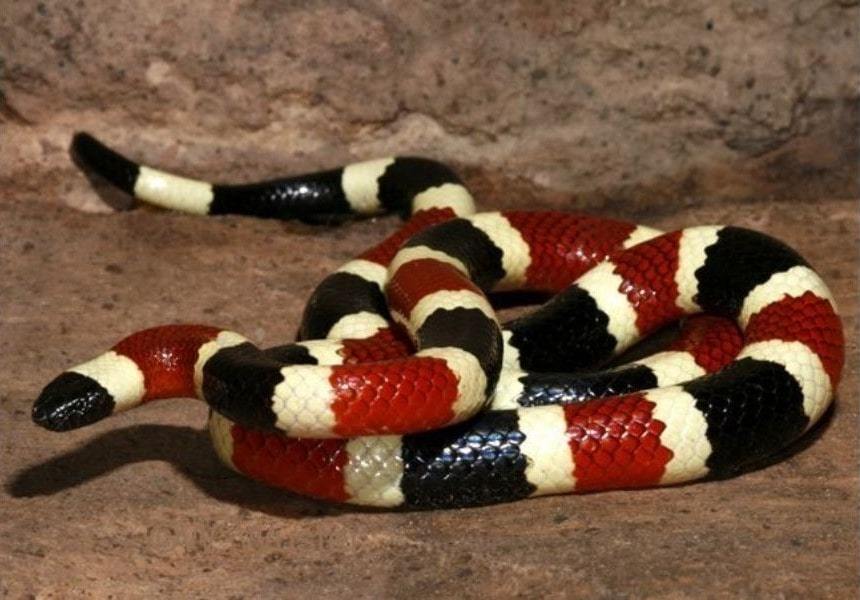 Malaysian Blue Coral Snake: This snake is endemic to the jungles of Southeast Asia. It differs from its congeners by its magnificent dark blue color associated with blue (or white) lines on the sides. Its tail and head are also decorated with orange scales. 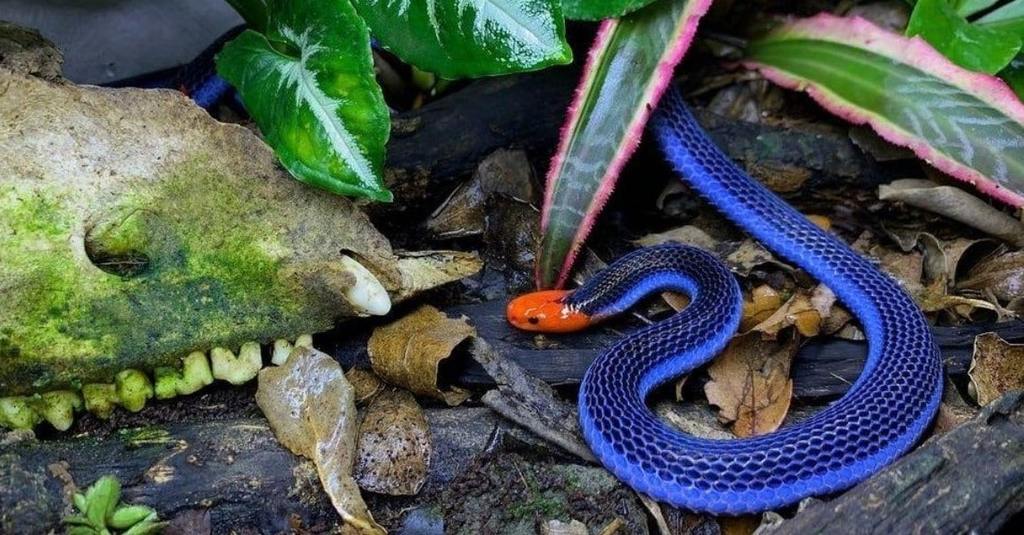 Coral snake venom is one of the most toxic in the world. It is composed of a cocktail of proteins, peptides, amino acids and enzymes and is produced by a specific gland, often called the venom gland.

Discover our article about the production and functioning of snake venom.

Due to its small size, the Coral Snake can only inject its venom by chewing, which makes its envenomation less dangerous than other reptiles.

Its venom is mainly neurotoxic. It acts directly on the nervous system, causing progressive paralysis and respiratory failure.

These symptoms can sometimes take several hours to appear in its victim, up to 12 hours after the injection. Moreover, its bite usually causes little or no pain or visible reactions. But if not treated quickly, the effects can come on suddenly and disrupt the connections between the brain and muscles.

Symptoms of a Coral Snake bite include muscle paralysis, visual and speech problems, and respiratory or heart failure, which can lead to death.

It is important to know that the Coral Snake is one of the species that do not always inject their venom during a bite. Moreover, it is quite rare that an envenomation occurs following a bite of this animal. 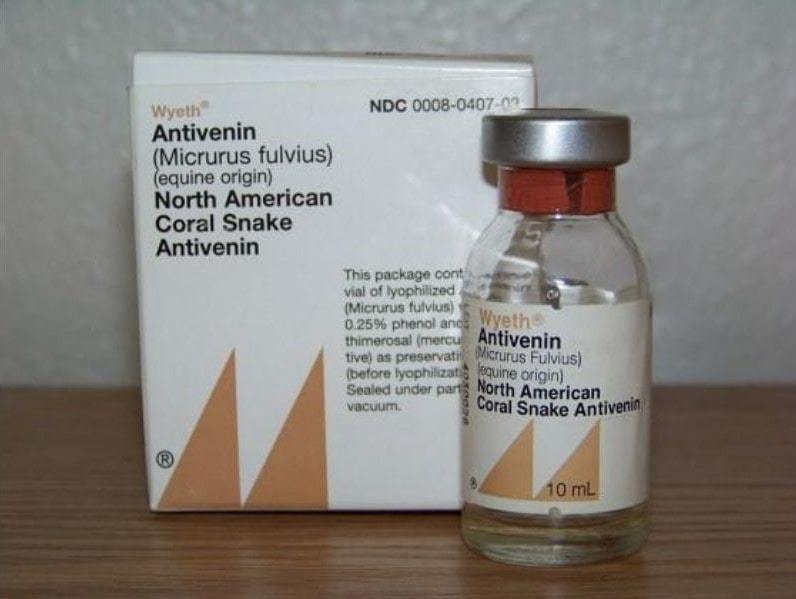 The most effective antivenom against a bite from this reptile is NACSA (North American Coral Snake Antivenom). It is derived from the horse, as are most other antivenom serums.

It should be used as soon as symptoms such as those mentioned above appear. But if no symptoms appear, there is no reason to inject it. It is certainly because the snake has not diffused its venom into your body. 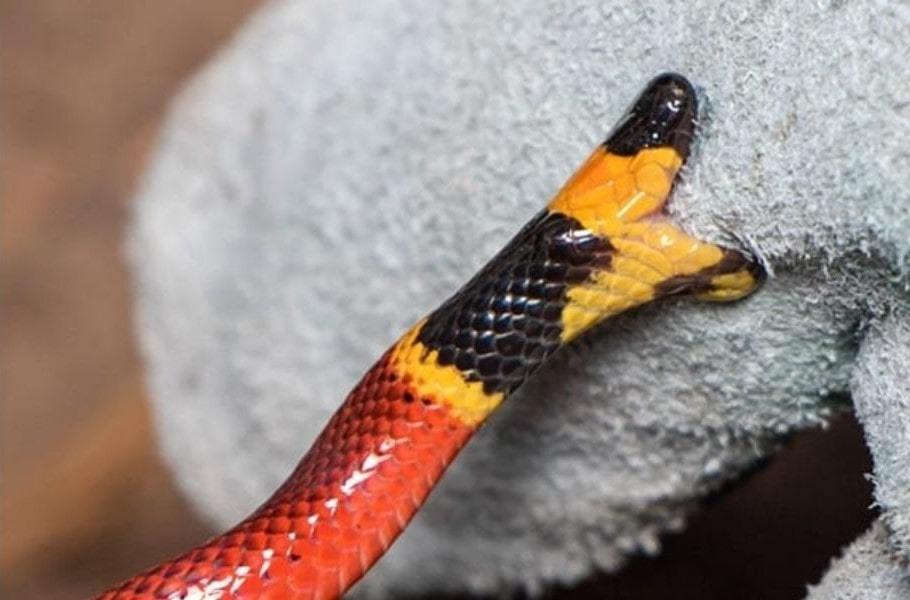 The Coral Snake is a shy and peaceful species. This is why it rarely attacks humans directly. It will only bite if it is trampled or handled.

The small fixed fangs of this animal do not make it easy. As we said earlier, it has to chew its victim to be able to pierce its skin and inject its venom.

Because of its small size, its venom gland does not allow it to store large quantities of poison. Because of this, it may try to hold on to its victim for a while. This characteristic makes the Coral Snake’s bite rarely fatal to humans, because it cannot inject a large enough quantity of venom. In fact, no death from a Coral Snake bite has been recorded in the United States since the advent of antivenom. Only 50 of the 9,000 reported bites in the United States are from the Coral Snake, which is quite reassuring.

To properly treat a Coral Snake bite, it is first important to know when the bite occurred, as the effects can occur up to 12 hours after the envenomation.

The 2 important steps to treat this bite are: treat the local wounds (even the smallest ones) and avoid the movements of the victim because these can increase the heart rate and lead to a faster spread of the venom.

Note: the use of tourniquets or extraction of venom by suction or incision are not good practices. These can even be counterproductive and infect another person. 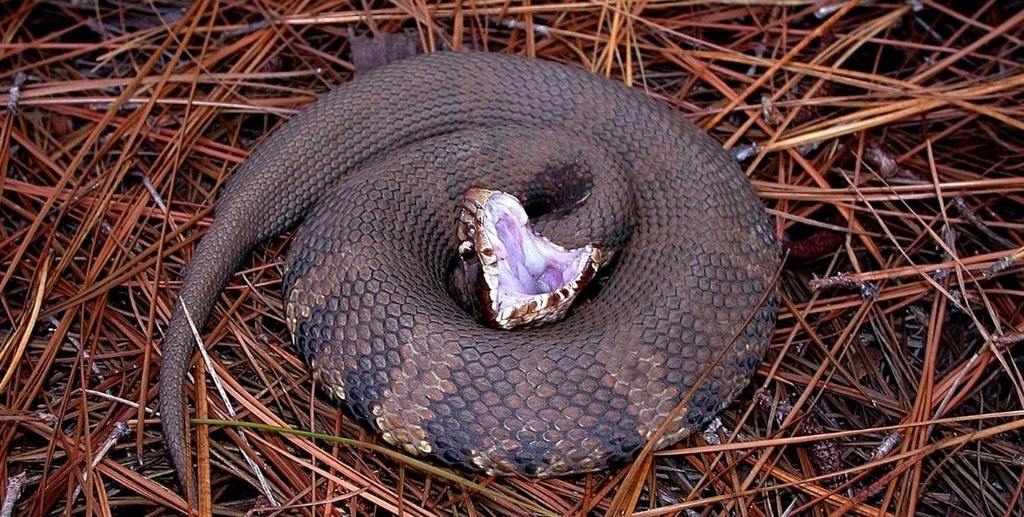 The Coral Snake can be targeted by other snakes, including the Cottonmouth Snake. The Raccoon is also an animal that does not hesitate to attack it when it does not find fish to feed on. The venom of the Coral Snake does not reach it, which allows it to approach it and break its neck to kill it.

To protect itself against its predators, the Coral Snake has formidable technical weapons. Its tail being very similar to its tail, it uses it to deceive its predators by retracting their head into their body and raising their tail. This trick makes the animal appear to be already dead.

When it feels in danger, this reptile can emit a sound by expelling air from its cloaca. This technique, also present in other species, allows to frighten their aggressor.

Where Do Coral Snakes Live ?

Due to the large number of species of Coral Snakes, their range is quite large.

Western species inhabit the hills of the southeastern United States, Arizona, and northern Mexico. Most of them hide in the ground or sand to be more discreet.

The Coral Snake is rather solitary and nocturnal in nature and prefers to take refuge in burrows, under rocks or any other support that allows it to stay warm.

What Do Coral Snakes Eat ?

Like all snakes, the Coral Snake is a carnivorous animal. Its diet consists mainly of lizards, frogs and other snakes (even those of its own species).

The Coral Snake is oviparous, which means that it gives birth by laying eggs. It is the only species among the 4 venomous species present in the United States to be of this type. The others are either viviparous or ovoviviparous species.

On average, the Western Coral Snake lays between 6 and 13 eggs, against only 2 to 3 for the Asian Coral Snake. The hatching usually takes place during the fall.

At birth, the babies are about 6in (15cm) long and are already very venomous. They are also born with almost their final color.

Over time, some snakes have taken on the appearance of the Coral Snake to appear highly venomous to their predators and thus deter them. This camouflage also prevents them from having to produce snake, which requires a lot of energy for snakes.

Among the 50 species of snakes considered “false coral snakes” are the King Snake, the Sinaloa False Coral, the Campbell False Coral and the Eastern Milksnake.

How to recognize a venomous Coral Snake ?

If this technique works very well with American species, it is not the case for Asian species. In some countries, there are even Coral Snakes that do not have their traditional appearance at all. Some have red rings touching black rings, while others have pink and blue rings, or even no apparent band.