Belcher’s Sea Snake: The Snake With The Most Toxic Venom

Snakes are one of the oldest animals that have inhabited the earth, since the beginning of time, reviews have been found on these amazing animals, which can adapt, with great ease, to a number of environments, especially jungles, forests, rivers and large seas, the latter being the habitat in which it resides.

You may have heard the names of the rattlesnakes, the black mamba or certain other currents, but without a doubt, I am quite sure that you have heard very little about the Belcher’s sea snake, this particular reptile is considered one of the common snakes of aquatic habits. Also called Hydrophis belcheri or Faint Banded Sea Snake, this species is extremely venomous.

What is a Belcher’s Sea Snake ?

The most common is to find snakes on the ground, in trees, in their burrows or large bushes. Its range is actually much wider, reaching into marine areas, and it is here that the most deadly snake in the world lives, the Belchers Sea Snake, containing a venom much more ferocious than that of the large venomous snakes that cover the land territory.

Although fish extremely similar to snakes live in the sea, such as eels and moray eels, the Belcher’s Sea Snake is a reptile in its own right. This one has evolved to fully adapt to marine life, having to come out to breathe from time to time at the surface. 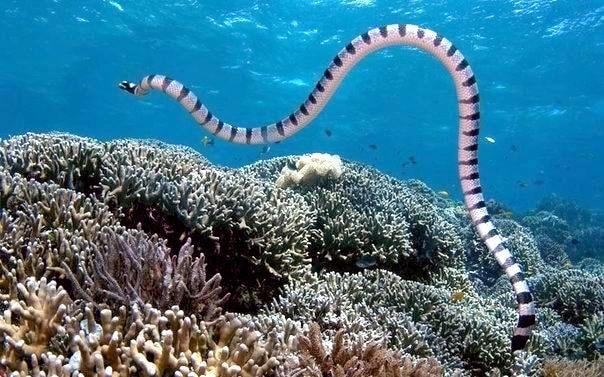 Belcher Sea Snakes are medium in size, ranging from 19.68in to 39.37in (0.5 to 1m) as adults. Their slender body is usually yellowish chrome with dark greenish crossbands. Their dorsal design does not extend to the belly.

Their head is short and has bands of identical colors. Their mouth is very small, but perfectly suitable for aquatic life.

Their scales are different from most other snakes. Each dorsal scale has a central tuber. The body is strongly compressed laterally backwards. The ventral scales are very narrow, but only slightly wider than their dorsal scales.

Like other sea snakes, it has a paddle-like tail that makes it an expert swimmer, and it rarely goes over land. It breathes air and has more than valves in its nostrils that close underwater. They can hold their breath for 7 to 8 hours while hunting and even while sleeping.

This species is descended from the land snakes of Australia and have evolved into aquatic reptiles. The only difference between land snakes and sea snakes is small adaptations to the marine environment, such as their tail tips, which look more like the rest of the fish. Because they are cold-blooded animals and need warm water and sunlight to keep their bodies warm, they do not go below 100m underwater.

In general, they are docile and non-aggressive. When this snake bites, it does not necessarily deliver their poison, but only after repeated bites. Moreover, it happened that fishermen handling nets were bitten, but only 25% of these bites were poisoned.

Where Does the Belcher’s Sea Snake Live ? 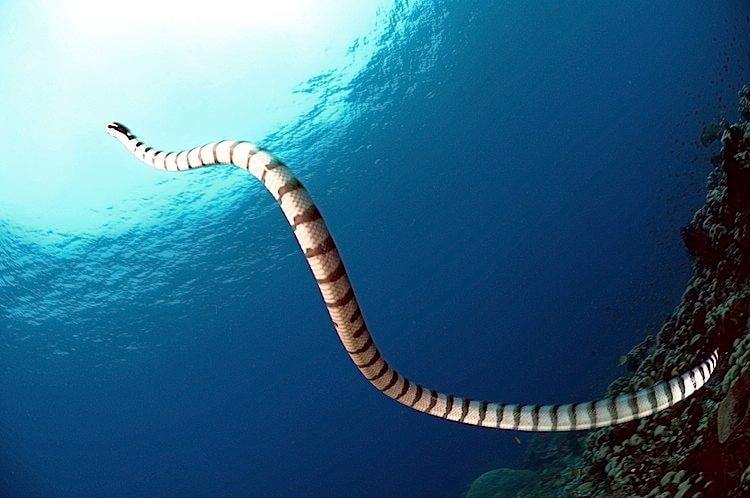 This particular sea snake is found near tropical reefs in the Indian Ocean, in the Gulf of Thailand, New Guinea, the Solomon Islands, Indonesia and off the Philippines.

It was also recently discovered off the coast of Australia, across Ashmore Reef in the Timor Sea.

It can be found at the surface in these shallow areas, because in these places the snake can find its food more easily. Moreover, these areas allow it to find a natural protection against predators that hunt it.

Being aquatic in habit, the Belcher’s Sea Snake can rarely be seen on land. When it is immersed in water, it closes certain valves that it has in its nostrils, which allows it to hold its breath for 8 hours. This allows him to swim, hunt and sleep and when the air is exhausted, he comes up to the surface to take air again.

However, in recent years, due to the chemicals that some companies are increasingly dumping in the water, the Hydrophis Belcheri Sea Snake has had to change its habitat and come out more regularly in search of new refuges towards the shore. This has allowed it to socialize more with humans.

What Does the Belcher’s Sea Snake Eat ?

The Belcher’s Sea Snake’s favorite food is crustaceans, small fish and some eels. It therefore prefers to be near large shorelines, making its home between natural caves by rocks or in burrows abandoned by other fish or snakes.

In addition to the banks, it tends to go deep into the ocean, although it does not go down too much, because it has to come up, every period of time, to the surface. 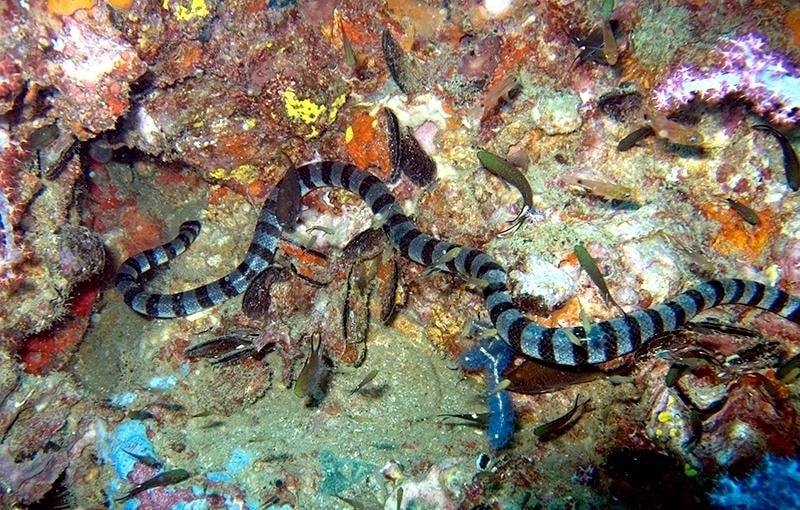 So, maybe you’ve wondered: Is the Belcher’s sea snake the most poisonous snake in the world ? The answer is yes !

The Belcher’s Sea Snake is considered the deadliest snake in the world. For a while, the most deadly was thought to be the Inland Taipan. However, studies have shown that the Belcher’s venom is at least 100 times more toxic, putting the Taipan in second place.

Learn more about this snake in our article about the Inland Taipan.

With only a few milligrams of this toxin, can kill up to 100 men. Its 50% lethal dose (LD50) by intramuscular route is estimated between 0.07 and 0.25 mg/ kg. It is mainly a neurotoxic venom, but its effects in humans are still under study.

Despite a venom full of neurotoxins capable of killing, the Belcher’s Sea Snake is completely harmless, the most harmless of the elapidae family. This snake does not represent a real danger for humans. It almost never bites and when it does, it does not release all its venom. This means that only 25% of humans bitten by this sea snake will be poisoned.

Sea snakes use their venom to kill or immobilize their prey, and also as a defense mechanism. The venom that the Belcher sea snake injects through its fangs is modified saliva.

The Belcher’s Sea Snake attack is simple: it comes in with its teeth stretched out and when it opens its mouth, the glands are squeezed and the venom comes out. Once bitten, the venom is injected.

Although there are antivenoms for Belcher bites, immediate treatment is crucial to avoid death.

Belcher’s Sea Snake vs Inland Taipan: Which is the Deadliest Snake ?

For those wondering who is more venomous between the two, here is a video comparing these two incredible reptiles:

Other characteristics of the Belcher’s Sea Snake

Although being a powerful deadly weapon against the human species, the Belcher’s Sea Snake is the most docile of its family of venomous snakes and kills the least number of humans.

We have taken time to write this article as complete as possible in order to offer you quality information. If you appreciate this kind of content, feel free to join our private community by subscribing to our newsletter. You will receive a preview of each of our articles as soon as they are published on snake-dream.com

Snake Dream™ aims to change the negative view of these fascinating and often misunderstood reptiles. We have tried to convey all our passion for these animals through our Clothing and Snake Jewelry.